This post contains the second half of part two  and part three of Randy’s four-part FB posting about Sabrina. His first post and a half are here. His original FB part three contained a variety of images in the comments to back up his claims but they can all be found in Ebony’s first post here.

Randy’s redacted names from his FB have been changed to create consistency between narratives. Money1 is now redacted1

Once everyone is ON THE PLANE the jig was up. Ebony posts all the information she’s gathered. Sabrina now desperately wants to clear her name because she thinks people aren’t going to loan/donate money to her. It becomes my job to absorb that aggro while keeping Lauren virtual company on the flight. (They all had wifi). Thankfully they were sitting in different areas. So no matter how flustered Sabrina got, there were many rows of seats and flight attendants between them. The flight attendants are notified. Sabrina begins to suspect that Lauren was THE MOLE who was talking to ( redacted1 ) and convinced them not to loan TWENTY THOUSAND MORE DOLLARS to Sabrina. The woman who made the FB fundraiser is shocked at all of this information and puts a freeze on the fundraiser. I become the proxy. (with my permission) Lauren blames it all on me! I did it! I am THE MOLE! and then become the focus of Sabrina’s aggravation for the remainder of the flight.

We have been getting so many reports from victims, but understandably many of them aren’t willing to step forward to contact authorities. Be it embarrassment, or not wanting to revisit emotional trauma, or any of a list of reasons.

If anyone comes forward, please treat them with respect and dignity. These people are reopening wounds when they step forward and relive this. But also encourage them to speak with  authorities. For most, it will be the FBI internet crime division. Every report, every piece of the puzzle helps to establish a pattern of behavior. What follows is chat logs and annotations. No changes were made except redacting one name. ( redacted1 )

These and similar comments were a constant refrain in our chat in-boxes that week. Sabrina wanted a constant validation of her actions. She wanted to be forgiven and told everything is okay. But how were we to respond? Every time she apologised for having FEELINGS she was posting elsewhere about how horrible we were. About how Ebony (who according to Sabrina begged and pleaded for them to stay at Ebony’s house) was becoming depressed and angry at Sabrina and declaring that her birthday was ruined. Essentially we became immune to her bleating. This would become important as she was messaging me during her plane trip.

**Since this conversation, several people have come forward and said that she has used her brother as a character in her scams against them. Alternately throwing him in and out of jail.

** This is not the same drug she claimed earlier when asking for prescription money. It is difficult for me to address the MS issue, because as someone with an invisible illness (RA) I feel sketchy claiming someone else is lying. I will however state that she has been very inconsistent when talking about medications, pricing and type depending on whom she was talking to and how much money she was asking for.

** Sabrina has constantly insisted that Ebony was her cousin when talking about her to other people. This has yet to stop. We don’t understand why she keeps holding on to this lie.

** This is actually true! Big hearted people started a fundraiser for her… and once they found out they were feeding a scam shut it down.

** Not True. Actually she tried to publicly humiliate Jamie for closing the fundraiser. The post was later deleted.

** Okay why the fuck not let’s talk about GamerGate. She’s not a game developer. She is an extremely minor person in the comics industry. There is zero evidence stating she was ever a target of any Doxxing. Why does she claim GamerGate? Because she wants to claim that she is/was a student when there is proof to the contrary.

And the National Student Clearinghouse responded with a big fat NOPE not currently a student, but she was a student for TWO MONTHS at UW. You cannot get a Masters degree in two months. She’s alternately claimed a Bachelors on linkedin. Her Seattle Central Community College transcript is similar. many enrollments for only a couple of months over and over. 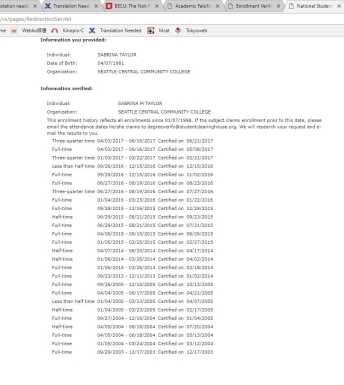 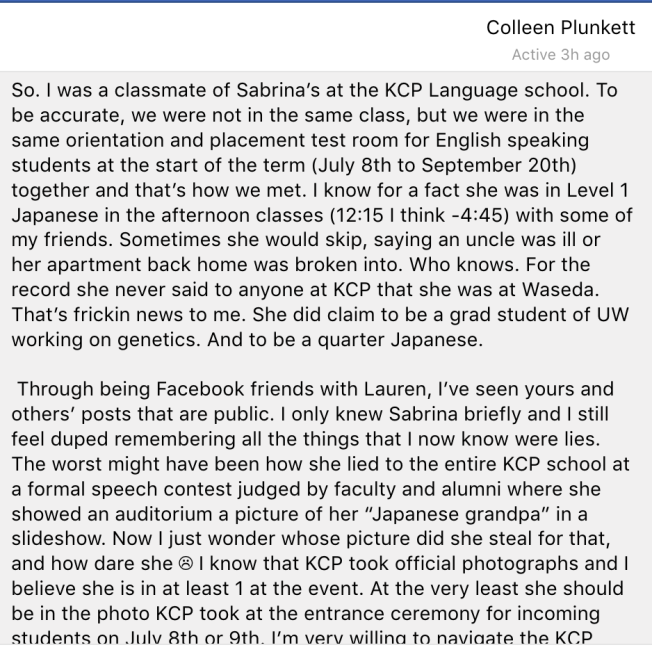 From Colleen To Kathryn. Kathryn and Collene met once through Sabrina at Design fest.1/4 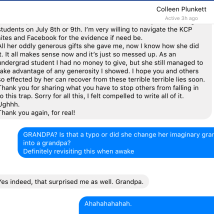 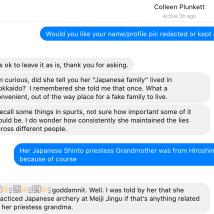 ** This is a lie. The amount is greater than $10k. He told Lauren everything. But yes, he wishes to remain anonymous and will continue to be called ( redacted1 ) in transcripts.

** Ok, so once we let on that we know the Kyoto thing not only wasn’t happening, but no such program exists she’s no longer going. She’s going to UW instead. Of course this did not prevent her from recently borrowing money to cover her year’s worth of medication, her financial aid, etc. You’d think the people she was borrowing money from would be told that no, she’s not going to live in Kyoto after all?

** I’m stalling. Lauren is going to tell her that I’m “The MOLE” at any part of this conversation, so it’s time for budget talk.

** “I lost everything” is always her automatic response when approached about a budget. She did it when trying to get 3k from me. She did it to Kathryn, Lauren, etc whenever budget is brought up.

** Simultaneously, Her conversation with Lauren as reached a point of “Ok, so prove everyone wrong, send proof of employment / Degree/ etc”

** It’s time for me to take Sabrina’s aggro until they land.

** This is sort of true? He told Lauren he was going to go get some sleep.

** This was the last she would ever speak to me.